‘DISGUSTING’ and ‘Dickensian’ conditions at social housing flats in Brownsover have sparked calls for a housing association to take action.

Residents at four blocks in Millers Dale Close and Dovedale Close, comprising 108 flats, have complained about damp, broken heating, exposed wiring, and filthy communal areas which are not routinely cleaned.

They also claim a crack in the wall affecting three flats has gone unrepaired for two years, a fault in a security door meant it was left open for teens to enter a stairwell and take drugs, a fire escape hatch is stuck shut, and a window has been broken for nearly two weeks.

Siddaway House resident James Matthews told The Observer he was suing Orbit Housing Association (OHA), the body responsible for maintenance at the flats, because he felt he was not getting value for money on the £525-a-year service charge he is obliged to pay. 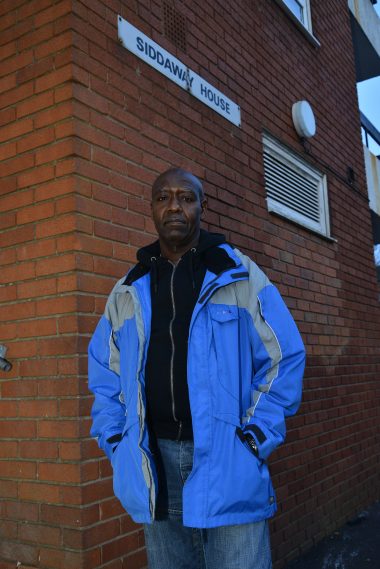 He said: “I pay my rent and my service charges and they’re not doing anything. Why should I pay?”

He says maintenance has gone downhill since OHA property managers relocated from Rugby to Stratford.

“When we had a housing officer in Rugby, she knew everything and it would get sorted,” he said. “OHA don’t seem to care about the properties.”

“I’m disgusted with them. No-one wants to take ownership.

“We just seem to be fighting a losing battle. I won’t be treated like that. We’re not second class citizens.”

Coun Jim Ellis, who represents Newbold and Brownsover ward, said the tenants had been ‘badly let down by their landlord’.

He said: “They are good people who pay their rent and are entitled to safe, secure homes they can keep warm.

“With cold winter months on the way, it’s a disgrace they are enduring Dickensian conditions, despite having reported problems many times.

“In the absence of prompt action by OHA, I am asking Rugby Borough Council (RBC) to step in and, if necessary, undertake the repairs, which the landlord would then have to pay for.”

Martin Chuter, Director of Property Management at Orbit, said: “Many of the issues raised have been rectified and our teams continue to engage with customers to progress our programme of planned work. Orbit has been working closely with RBC throughout the process.”

An RBC spokesman added: “We have been in discussions with Orbit Housing in recent weeks regarding issues at the flats, and have been assured Orbit has taken steps to speak with tenants and organise a programme of works to rectify outstanding issues.”

Coun Ellis is inviting the tenants to a community meeting at Brownsover Community Centre at 10.30am on Saturday (November 24) to support further action.

From plumbers, to restaurants, we can provide you with all the info you need.

View and download all of the public notices in the Redditch Standard.

Check out all of the latest reader offers to get your hands on some free gifts.