THE DESTRUCTION of an ‘irreplaceable’ deserted medieval village in Warwickshire – described as a ‘cynical act of cultural vandalism’ – has resulted in the family responsible being fined a total of £160,000 after they were taken to court by Historic England.

John Mac, Elizabeth Mac, and their daughter Heather Mac caused irreparable damage to Withybrook in Warwickshire between 2015 and 2018.

Historic England brought the case against the family after they damaged and destroyed the medieval earthworks on the site by constructing a four metre-wide track using machinery, and installing a water pipe, troughs, gateposts and fencing – without the necessary Scheduled Monument Consent from the Secretary of State.

Historic England said this caused a ‘very high degree’ of harm, resulting in the total loss of an important medieval trackway and damage to the site of a medieval building.

The family continued with the work despite multiple warnings that they were destructive, illegal and must cease.

The damage was first brought to the attention of Historic England by local residents. Despite written and verbal warnings from Historic England inspectors and Rugby Borough Council planning enforcement, the Macs took no steps to reduce or minimise harm to the site and did not engage with Historic England’s investigation.

The works were not committed by accident or through the act of rogue contractors, they were deliberate and sustained. 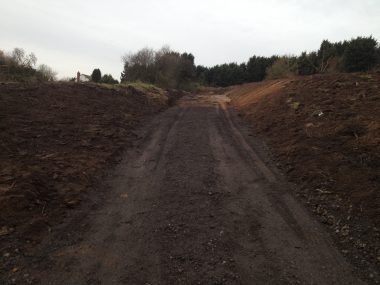 The family ploughed a four metre-wide track through the ancient site.

The Withybrook scheduled monument – a nationally important archaeological or historic site protected by law – is on private land owned jointly by Heather and Elizabeth Mac. John Mac denied Historic England access to the site, and all three knew the site was protected and of their responsibility in safeguarding it.

They have been ordered to pay fines of £30,000 each, and together costs of £70,000. They face an automatic 14-month prison sentence if the fines are not paid by September 23.

He said: “Archaeological features have been disturbed, damaged and destroyed without consent. The remains of the Withybrook settlement are of national importance and the site has the highest level of heritage protection available.”

He added the wilful damage deprived current and future generations of important evidence and knowledge about our past.

Rugby Borough Council’s growth and investment spokeswoman Coun Jill Simpson-Vince said: “This cynical act of cultural vandalism has caused irreparable damage to a protected historic site of national importance, and the severity of the fines imposed by the judge sends a clear message to landowners who choose to ignore advice from our planning team and flout the law.”

During sentencing at Warwick Crown Court, Judge Potter noted the defendants had not shown any remorse for their actions and there have not been any attempts or offers to assess and remediate the damage caused.

Judge Potter said the defendants had been dishonest and had tried to delay the authorities’ investigations. Credit for admitting guilt was limited, with John Mac only deciding to enter a guilty plea two days before his trial at the Crown Court was due.

A Historic England spokesperson added Withybrook was one of just 460 in England of high enough quality and significance to be protected as scheduled monuments.

They added: “Sites like this are the most important sources of understanding the medieval period as they show the historic pattern of rural land-use, provide evidence for the development of technology, and preserve buried deposits and material remains which tell us what life was like during the medieval period.”

Looking for love? Start searching to find a new date on heart2heart dating.

We can provide all of your printing needs at competitive rates.