A PLUCKY young teenager who had 45 minutes to live after a nightmare accident is the face of the Christmas fund-raising campaign for the charity which saved her life.

Rosie Jeffs, 13, has defied doctors since she was thrown from the back of her dad Jamie’s motorcycle when he had to brake suddenly in April 2017.

The Ryton teen, who was told she would never ride a bike again, has since made a full recovery – thanks in no small part to the Warwickshire & Northamptonshire Air Ambulance, which flew her to Birmingham Children’s Hospital for the specialist care she urgently needed.

Despite wearing protective clothing and a helmet when the accident happened, Rosie – a pupil at Bablake School in Coventry – landed with such force that she suffered 10 breaks and fractures to her right femur, tibia, fibula, left shoulder, pelvis and jaw.

Rosie’s mum Syreeta and brother Thomas drove to the scene of the accident after receiving a phone call from Jamie.

She said: “When we got there paramedics from the land ambulance were cutting off Rosie’s protective gear. I remember there was a bone sticking out of her leg. After about ten minutes the Air Ambulance appeared in the sky and landed nearby.

“Rosie was losing a lot of blood – we found out later that her life expectancy was only about 45 minutes. 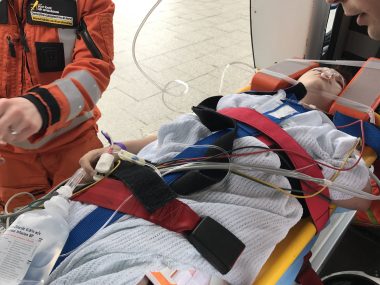 Losing blood rapidly, Rosie was just 45 minutes from death when she was rescued by paramedics from the Warwickshire & Northamptonshire Air Ambulance.

“The crew sedated Rosie, made her comfortable and got her into the helicopter. I was able to fly with her and we arrived at Birmingham Children’s Hospital in just seven minutes.

“If she hadn’t got to a hospital so quickly she would have bled to death from her internal injuries.”

After seven hours of surgery on both legs, Rosie was in hospital for a month during which time she had an operation to put plates in her femur, tibia and fibula.

When discharged, Rosie was in a wheelchair – but was determined not to be held back, and continued to do everything she enjoyed including day-trips to the seaside and drama summer camps.

She had to take her SATS exams at home but was able to return to school – still in a wheelchair – three months after the accident.

“Everything was difficult and it was a struggle for us as a family,” Syreeta said. “We had always been very outdoorsy and being confined to the house was very hard for Rosie.”

Rosie had to undergo two further operations to remove screws and plates when her broken bones healed. Over time she went from being in a wheelchair to using a zimmer frame and then crutches and a walking stick.

Now back to full health, Rosie is back playing hockey, taking part in dramatic productions and riding her bike.

In April, to mark the second anniversary of the accident, she completed a sponsored climb to the top of Mount Snowdon, raising nearly £600 for the Air Ambulance. 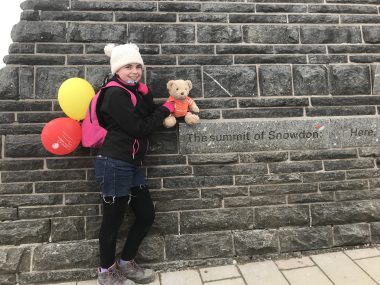 In April, Rosie raised nearly £600 for the Air Ambulance by completing a gruelling seven-hour 3,560ft climb up Mount Snowdon.

Now she is delighted to be able to share her story for the charity’s Christmas campaign.

She said: “The air ambulance saved my life and I wanted to do something to say thank you.

“As it is the season of goodwill to all, I am hoping my story will encourage people to support this lifesaving cause.

“I am living proof of the amazing work they do every day of the year – including Christmas Day.

“Whenever I see the Air Ambulance flying overhead, I blow it a kiss.”

Every mission flown by the Air Ambulance costs £1,700. The charity receives no government funding and relies on donations to keep flying. Visit www.theairambulanceservice.org.uk/ways-to-give to donate.

Drivers in Warwickshire again urged to slow down

Check out all of the latest reader offers to get your hands on some free gifts.

Catch up on your local news by reading our e-editions on the Redditch Standard.

View and download all of the public notices in the Redditch Standard.